Cloud sponges (Aphrocallistes vastus) are a prehistoric sponge typically found only in deep cold seas. Their unique and fragile skeletal formation makes cloud sponges extremely sensitive to the slightest touch, sedimentation, and to physical disturbances from bottom trawling fishing activity. They are sometimes called “glass” sponges because their structure is made up of very sharp fused spicules of silica. Cloud sponge are found in the northern Pacific Ocean and their range includes Japan, Siberia, the Aleutian Islands and the west coast of North America from Alaska southwards to California and Mexico. It is a reef-building species found in deeper waters on the western Canadian shelf growing on sediment-free rocks. They grow in fiords off the coast of British Columbia, Canada, beginning at depths of 25 metres (82 feet), or more.

One key element in creating successful underwater photographs is to use negative space to artistic effect. Negative space is defined as being the area between and around objects in a photo that can help strengthen your composition and add extra emphasis to the main subject. Since elegant coastal shrimp have mostly translucent bodies, the orange sea pen’s colonies of polyp formations provided both a colorful backdrop and some superb negative space for my main subject.

Elegant coastal shrimp have a prominent hump on their back and are relatively small at 2.3 inches (6 cm) in length. Ranging from the Aleutian Islands, Alaska to California, they are but one of more than 85 shrimp species inhabiting British Columbia’s Emerald Sea. While most local shrimp species are easily recognized, you have to take a longer look to accurately identify the elegant coastal shrimp as they are sometimes mistakenly identified as being threespine costal shrimp. 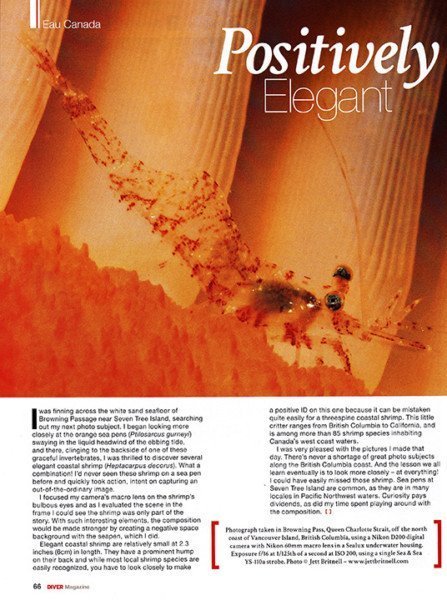 Photograph made in Queen Charlotte Strait’s famed Browning Passage, off the north coast of Vancouver Island, British Columbia, using a Nikon D200 digital camera in a Sealux underwater housing fitted with a Nikon 60mm macro lens and a single Sea & Sea YS-110a strobe. Exposure f/16 at 1/125th of a second at ISO 200.